Scientists tell us that the exact point when humans became “religious” is unknown, but traces back to sometime in the Paleolithic era between 45,000 to 200,000 years ago, with the earliest evidence being ritualistic burying of the dead. Such practices represent “an awareness of life and death and a possible belief in the afterlife.” Evidence for belief in a supernatural being or beings can be traced back to the Upper Paleolithic Era when anthropomorphic images began appearing on cave paintings and personal items as far back as 50,000 years ago. It seems that from the beginning humans have always portrayed “God” in their own image. 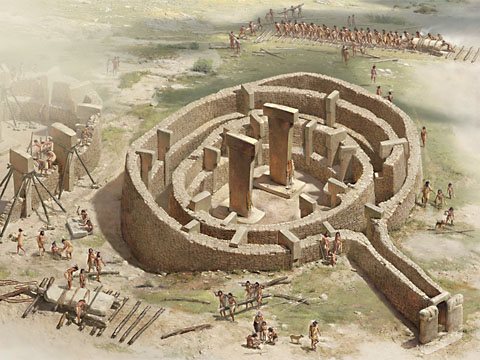 The enigmatic complex known as Gobekli Tepe in southern Turkey, dating back to 10,000 BCE, is recognized as the oldest religious structure known to man. It includes a number of T-shaped pillars representing human-like figures that are decorated with carved images of various animals. This is roughly the area from which the domestication of grain emerged, kickstarting the Neolithic Revolution. This led to the domestication of animals, the invention of pottery, beer, the establishment of villages and cities, laws and citizenship, land as property, taxes, accounting practices involving money and debt, slavery, standing armies, ruling monarchies and dynasties, and eventually writing. The Neolithic Revolution was perhaps the greatest transition in human life in all of our history, and somewhere during this time humans began to believe in all-powerful supernatural beings, or “gods” in the modern religious sense. 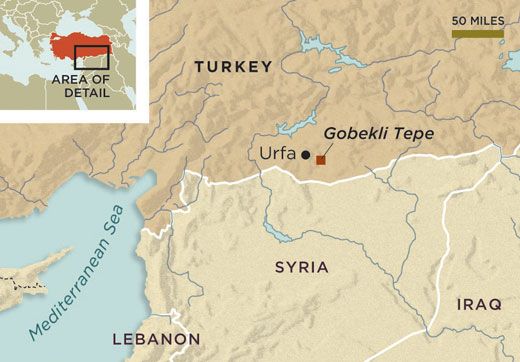 It is interesting that this region in northern Mesopotamia is referred to in ancient Sumerian myth as an important place of origin for both humanity and the “gods,” and is also very close to the site of ancient Ur of the Chaldees (modern Urfa), from which Abraham emerged sometime prior to 2000 BCE.

From the beginning our conceptions of God have been shaped by the stories that we have told each other. Yes, these stories include testimony of supernatural encounters with gods, angels, and demons, dreams, miracles, visions and audible voices, but the supernatural element has always been secondary to the practical element of human power. The gods were always an integral part of human control-systems, supporting the ruling class until those being oppressed were able to overthrow it with the superior numbers of the oppressed and angry mob that has nothing left to lose.

With the invention of writing around 3000 BCE this religious control system was able to exercise even more power. From the beginning religion and law were seamlessly connected in the sacred texts. The earliest records of ancient Sumer look to their gods as the ultimate lawgivers and punishers, and the kings, priests and soldiers exercising their powers with violence were just being “obedient to the gods.”

One of the central practices of polytheistic religion that has been observed in all of human culture – from the Inuit above the North Pole to the Aborigines of Australia – is the practice of sacrifice. It is essentially the working out of the simple idea that…

In order to maintain peace in our community…

something has to die.

Just think about this for a second. This is an incredible and shocking belief that once underpinned ALL OF HUMAN SOCIETY! It was a belief that every human being just naturally accepted as being part of the normal course of human affairs. Peace is obtained only through violence. It is violence that keeps us safe. And this violence was looked upon approvingly by the all-powerful gods. This is superstition at its very worst, but thankfully these ideas that were once universal in their power over humanity are now seen for what they are: primitive superstition.

The understanding that violence is at the very heart of human culture, politics, and religion was highlighted by anthropologist Rene Girard throughout his work from 1961 until his death in 2015. Girard took a big-picture view of human history and he charted a trajectory of human progress from our primitive superstitious violent origins to the world of today when sacrifice has been eliminated and violence is recognized as a problem, or at least the last resort to a problem, rather than a first solution or divine commandment that brings order to the community.

For Girard, man-made religion begins with violence. Specifically murder. The killing of a human (whether villain or victim) brought peace to the early paleolithic community. Human sacrifice was the primordial and archetypal sacrifice, and only later was the object of violence transferred onto animals as a way of re-enacting the original murder and somehow appeasing the gods that had allowed the chaos to appear. The progression passed from murder to the rituals of animal sacrifice to a system of community prohibitions (laws) that sought to keep the original source of chaos – which was simply human conflict – at bay.

On top of all of this, which was a long process going back perhaps hundreds of thousands of years, everything was tied together through myth. Stories were told and retold in caves and around campfires about the necessary violence that brought peace to the community. Truth and exaggeration were mixed into these original myths and the stories shifted and changed and took on a power and life of their own. The community became signified by the hero, and the hero was portrayed as being empowered by the tribal god, or transformed into a god himself, or sometimes the victim was portrayed as the benevolent god who delivered peace after his death. Whatever the case, these stories became ingrained in the communities that told them and became part of their very identities.

For Girard, man-made religion was built on the structure of:

This system was at its greatest power in the Ancient Near East for around three thousand years, starting around 3000 BCE with the invention of writing. Sacred texts allowed the system to increase but at the same time writing allowed for the appearance of competing narratives. For Girard the system was all a great deception. Religion was being used by the elites to control and oppress the masses while the mythic narrative of redemptive divinely-approved violence was actually obscuring the truth from humanity.

It was all a great deception, a towering man-made structure founded on lies waiting for a brave new narrative to appear. But who would dare to challenge with a new story?