Wright is the world’s leading Pauline scholar and his new work totals 1700 pages, but it is very easy to read. I’m about halfway through it. In this passage taken from chapter 10, section 3c, Wright provides a good summary of how Paul viewed Jesus, and how the New Covenant established by Jesus relates to the Old Covenant emphasis on keeping the Torah. The bold emphasis below has been added by me, and I present this passage here to bolster what I have recently written in my series “Jesus and the Law” at www.redmoonrising.com.

As we shall see, the problem which Paul faces is not simply universal sin, but the failure of Israel to be ‘faithful’ to the divine vocation (Rom. 3.2-3). This is resolved dramatically, in the unveiling of the divine righteousness (3.21), through the ‘faithfulness’ of the Messiah, Jesus. Anticipating the summary of the whole picture in [Romans] 5.12-21, where the action of the Messiah is described as ‘obedience’, what we see in 3.22 is the Israel-faithfulness through which the divine purpose of ‘redemption’ is accomplished: hence, in the telling phrase … ‘through the redemption which is in Messiah Jesus’. This single phrase anticipates the entire later exposition of the divine rescuing action that is set out in Romans 5-8, scooping it all up as it were and compressing it into this little ball so that it can play its crucial role in the exposition of justification (3.21-4.25). ‘In Messiah’, in other words, and by means of the redeeming action accomplished through his ‘faithfulness’ to the divine Israel-purpose, all those who believe are now declared to be ‘in the right’.

This emerges in several interlocking ways in the entire argument of Galatians 2.15-4.11 … The argument turns on the distinction between the promises to Abraham, which Paul declares are fulfilled in the Messiah, and the giving of the Torah, which Paul declares has done its God-given job and is now no longer relevant for the definition of God’s people. The single family which had been promised to Abraham can be spoken of simply as Christos, as (controversially) in [Romans] 3.16 but (rather obviously) in 3.26-29. This Christos is the ‘son of God’ who shares that sonship with all who, by the spirit, can call God ‘father’ (4.6-7). This has nothing to do (as is sometimes suggested) with the replacement of the old Israel with a new one, and everything to do (as is less frequently noted) with Paul’s belief that Israel as a whole is summed up and redefined in and by Christos. That, indeed, is the whole point of the decisive summary in [Romans] 2.19-20… Once again, being ‘in the Messiah’ and being ‘justified by faith’ are tightly combined in this passage.

The third obvious passage is Philippians 3.2-11. Paul begins by contrasting the kind of Jew he himself had been with the kind of Jew he considers himself now to be: ‘We’, he declares, ‘are the “circumcision” ‘ — we who worship God by the spirit, and boast in King Jesus, and refuse to trust in the flesh’. If you want to know where Israel is, in other words, look to Israel’s Messiah. If you want to see ‘the circumcision’, look to those who belong to Israel’s Messiah. ‘Whatever I had written in on the profit side, I calculated it instead as a loss — because of the Messiah’ ([Philippians] 3.7). Paul had been seeking to secure and solidify his place within the Israel that would be vindicated on the last day, but now has discovered that the Messiah himself, having already been vindicated by Israel’s God, is the one and only place where that secure identity is to be found. We miss the force of the passage unless we see that here, just as in Romans 3 or Galatians 3, the Messiah is the place where, and the means by which, Israel’s destiny is realized and membership in Israel, in ‘the circumcision’, is assured… 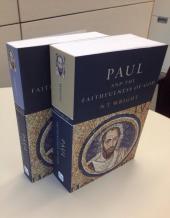 …It is, in other words, ‘in the Messiah’, in the Israel-in-person, that Paul finds the identity and hope he had formerly sought through his intense observance of Israel’s Torah. The status of being ‘justified’, declared to be ‘in the right’ and a member of the people of the one God, is given on the basis of pistis, the ‘faith’ of the believer which identifies him or her as part of the family of the ‘faithful’ Messiah…

In this intense study of Paul I’ve been able to look with fresh eyes at the Old Testament passages that Paul read that formed his theology based around the reality of the crucified, resurrected, and ascended Messiah of Israel, Jesus of Nazareth. Paul is clear that the “Law of Moses” is not a part of this newly formed Israel. The authority of Moses has been replaced by the authority (and the faithfulness) of Christ. This is now crystal clear to me, even as I was studying the possibility that Paul may have been a false apostle only a year ago. (And yes, I still want to address some of these specific allegations when I return to my study of “Jesus and the Law.”) I don’t think that Paul was misinterpreting the Old Testament. He was simply seeing its amazing fulfillment in Jesus as the “prophet like Moses” who would lead the entire world out of bondage and into the Promised Land!

The end of Deuteronomy is crucial to Paul, as well as the book of Isaiah, specifically the second half of Isaiah (chapters 40-66) that scholars refer to as “Second Isaiah” or as “Deutero-Isaiah” because of its profound links with the promise of a “second exodus” found in Deuteronomy 30:3-6. But what’s really going on here with this “second exodus”? Well, the Jews thought that it was all about THEM, and they looked for a political solution that would bring righteousness and vindication and establish the Jews as the rulers of the world! But God, in fact, had something much bigger in mind. Truthfully, the first forced exile was not Israel taken into bondage by Egypt. No indeed! The first exile was when Adam and Eve were driven from the Garden of Eden! And then after Cain killed Abel he established the first city, which my previous research has shown was in fact BABYLON. So we see that mankind was driven from Eden into Babylon, even before the flood. This is the first exile, and it continues to this day for many of the lost out there in the world today who have not found Jesus Christ.

Jesus came to redeem the Jews, of course, but this was only a small part of His mission. The “second exodus” predicted in Deut. 30:3-6, which is also mentioned throughout Isaiah 40-55, is actually the redemption of all of mankind — all the nations of the earth, not just the Jews — out of our exile from the spiritual darkness and wilderness of BABYLON, and back into the Garden of Eden. This original Garden, where human beings lived in communion with God without shame or guilt, takes its final form as the New Jerusalem of Rev. 21-22, wherein we find, once again, the Tree of Life!

I’ll be back with some more thoughts on the “New Exodus” soon.
In the meantime you can now keep up with me on Twitter @redmoongoodgame