Don’t let anybody make you think that God chose America
as His divine “Messianic Force.”

To be … a sort of policeman of the whole world.

God has a way of standing before the nations with judgment,

and it seems that I can hear God saying to America,

“You are too arrogant!  If you don’t change your ways,
I will rise up and break the backbone of your power!”

In 1933 William Branham received seven visions of the future of the world. Here is what is written on the Branham website regarding the last two visions that he received:

Vision Six:
Then there arose in the United States a most beautiful woman clothed in splendor, and great power was given to her. She was lovely of feature but there was a hardness about her that defied description. Beautiful as she was, she was yet cruel, wicked and cunning. She dominated the land with her authority, she had complete power over the people. The vision indicated that either such a woman would literally arise or that this woman of the vision was merely a type of an organization which is scripturally characterized by a female. Though the voice did not speak out and reveal who she was, he felt in his heart that this woman represented the rising Roman Catholic Church, and he inserted in parenthesis beside at the end of this vision which he had written out, (perhaps the Catholic church).

Vision Seven:
The voice bade him look once more. As he turned and beheld, a great explosion rent the entire land, and left the land of America a smoldering, chaotic ruin. As far as the eye could see there was naught but craters, smoking piles of debris, and no humanity in sight. The vision then faded away.

You can also listen to Branham preach about his seven visions at http://youtu.be/gGwkR_dPmsU where his discussion of this beautiful cruel woman who takes over America begins at 4:46.

Branham believed, as have many Protestants over the years, that the figure of Mystery Babylon in Revelation 17-18 represents the Roman Catholic Church. I do believe that Branham’s vision predicted the takeover of the USA by the Whore of Babylon, but she is much more than the RCC. She represents the culmination of mankind’s rebellion against God that first emerged as a superpower in the post-flood world at the Tower of Babel. She represents the World System of Babylon, as opposed to the Kingdom of Heaven represented by the New Jerusalem. And that world system is today dominated and controlled by the United States of America.

A similar vision was received by evangelist A. A. Allen on the 4th of July, 1954, when Allen was on top of the observation deck on the Empire State Building. He saw Mystery Babylon portrayed as the Statue of Liberty, and in this incredibly vivid vision the hand of God forced Lady Liberty to drink the cup of the wine of His wrath which contained a sword which the Lord forcefully shoved down her throat.

At the beginning of the judgment on Lady Liberty A. A. Allen heard a voice saying, “The eyes of the Lord run to and fro throughout the whole earth, to show himself strong in behalf of them whose heart is perfect toward him. Herein thou hast done foolishly. Therefore, from thenceforth, thou shalt have wars.”

This prophecy has certainly come true, as can be seen by looking at the list of US military interventions since World War II at http://killinghope.org/. No other nation comes close as far as the use of military violence is concerned. The full report of A. A. Allen’s vision can be read at http://www.miraclevalley.net/gpage6.html.

God has not been silent regarding the prophetic destiny of the USA.  But in our eagerness to embrace patriotism, capitalism and militarism we have simply refused to listen. And now we stand on the verge of electing a new president who proudly declares,

“I will not, and I will never, apologize for America!”

In fact, Romney has repeated this statement several times (see http://youtu.be/PNzySyobiuM), turning it into something like a personal campaign slogan, always accompanied by loud cheering. It is meant to be spoken in contrast to Obama, who is portrayed as being somehow apologetic for America’s history and reticent regarding our present position as the greatest superpower on the face of the earth. This portrayal comes through very clearly in the “Obama 2016” movie meant to tap into and stir up the fears and prejudices of proud patriotic Americans.

“I will not apologize for America!”

Heaven help us… God gives grace to the humble, but the proud will be brought low.  Our devotion to the patriotic propaganda that has seductively promoted this great mythology of   ” A M E R I C A ! ”   has become our greatest idol.  It is a purely faith-based world-view, but a completely blind faith based on principles that are opposed to those given by Jesus in the Beatitudes and the Sermon on the Mount.  True followers of Jesus must recognize that the commandment to “love your enemy” also strongly suggests “don’t kill them,” and that the Kingdom of Heaven does not advance in step with the geo-political goals of the world’s last superpower.

Lately I have been deeply impressed by a need for those who call themselves “Christians” to return to the foundations of the teachings of Jesus. The Manifesto of the coming of the Kingdom of Heaven is announced by Jesus in Luke 4:18-19,

“The Spirit of the Lord is upon me, because he hath anointed me to preach the gospel to the poor; he hath sent me to heal the brokenhearted, to preach deliverance to the captives, and recovering of sight to the blind, to set at liberty them that are bruised, To preach the acceptable year of the Lord.”

The Constitution for the coming Kingdom announced by Jesus is put forth in Matthew 5, 6, and 7, beginning with the Beatitudes and ending with the parable of the strong and weak foundations. If your Church is not a place that is drawing the poor in spirit, the meek, those hungering and thirsting for righteousness and justice, the merciful, the pure in heart, the peacemakers and the persecuted, then something is wrong with your foundation and your leaders need to re-learn what Jesus meant when He announced, “The Kingdom of Heaven is at hand!”

Last week, in anticipation of the election, New York City was hit by Hurricane Sandy. New York is for all intents and purposes America’s capital and the capital of the world system. Today I realized how this storm has been absolutely prophetic:

“And everyone who hears these words of mine and does not do them will be like a foolish man who built his house on the sand. And the rain fell, and the floods came, and the winds blew and beat against that house, and it fell, and great was the fall of it.”  (Matt. 7:26-27)

We’ve heard the words of Jesus, but we have ignored them and turned instead to protecting, defending, glorifying and promoting the standing and prestige of the greatest worldly Kingdom since Nimrod’s original Empire of Babylon. Our values have been twisted to value money over people, self-interest over “love thy neighbor,” and carnal power over sacrifice.  The American Empire centered in the financial district of Manhattan is an empire built on sand, and great will be its fall. 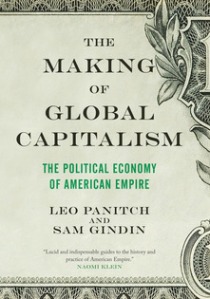 Just last month a new book was released that takes a look at global capitalism and America’s role in promoting it to the ends of the earth. The authors argue that of all the institutions erected to support this system none of them (including the CIA and US Military) have been as important as the Federal Reserve and the U.S. Treasury, while the power-brokers that control these institutions have always been the corporate executives of the Wall Street banks. (Leo Panitch and Sam Gindin can also be heard discussing their book on an hour-long podcast of the radio show “Against the Grain” – which is a great show that often covers topics related to today’s current Neoliberal New World Order.)

So the question remains, will a future President be able to “SAVE” America? Is Romney our man? Would he be willing to call a solemn assembly, to fast and pray and repent on behalf of America for our systemic transgressions of arrogance, violence and greed? Would he be willing to lead a solemn procession down the Broadway of New York City that leads through the heart of Manhattan from the financial district to Central Park? Broadway is the traditional location of our famous “ticker tape parades,” and it would be a perfect location for us to collectively humble ourselves, with our President and Senators donning sackcloth and ashes, traversing the Broadway in humility, renouncing our sins of the past and committing to follow the Narrow Way of Jesus Christ.

If that were to happen the grace and mercy of God would be released and judgment on America would be forestalled. Only then would the Great Prostitute, Mystery Babylon, be kicked off of our land and forced to find a new home. Perhaps she would visit China and set up shop in Beijing or Hong Kong, forestalling the judgment of Revelation 18 for several more decades. We can only speculate what might happen if we truly repented as a nation, but I firmly believe that until something as profound and sincere as that happens we remain on a collision-course headed for judgment.

18 thoughts on “Prophetic Warnings To America”